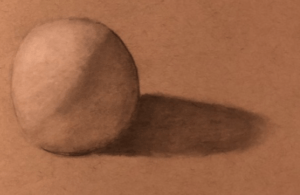 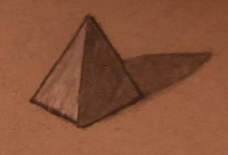 In today’s lesson, we are going to apply a cast shadow in our drawings. The cast shadow creates some depth and dimension to the finished pieces and gives it a stylish look.

The control of light on an object is key to drawing in 3D.

Pencil shading techniques can get pretty darn technical. In fact, books are written on this subject alone. Astronomers will study the cast shadows on astronomical bodies to determine their location.  Photographers, filmmakers, and videographers will pay close attention to the shadows cast on the objects in the scene.

I won’t bore with the technical jargon we will keep it basic. There are plenty of resources available for advanced study.

As a beginner, it’s better to keep it simple and allow your skills to grow. Drawing simple objects with proper shading techniques can render some pretty impressive drawings.

The circumference of the earth was determined by a tower’s cast shadow in Alexandria by the astronomer Ptolemy.

Go ahead try it out with your basic shapes. First, draw a sphere. Doesn’t have to be perfectly round.  Then go ahead and draw a cast shadow that stretches parallel to it like in the example below.

Notice how I drew the shadow across the page. Not up and down. I followed the direction parallel to the edge of the paper.

Not only does shadow create some value to your piece but it establishes the drawing in the ground. Check the differences here 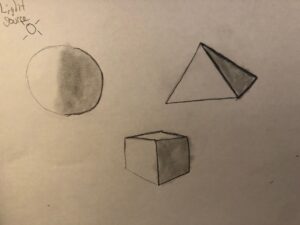 See how the objects are just floating around in space? There are not grounded. 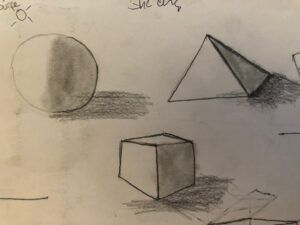 By adding the cast shadow, the objects look a bit more grounded in the drawing.

Play around with actual shadows. Take your pencil and see which way the shadow goes. Move the pencil around and change the direction of the light source. Put the light directly above, and move to the right and left. Try multiple light sources from different directions to see how the light interacts with the pencil. Notice how the cast shadow fades away as it extends from your pencil.

Shadow is an important concept to understand. When you draw something with lots of details (like a human face) it’s important to pay attention to how the light spreads over the objects.

Remember pencil shading techniques do not have to be technical. For now, stick with the simple placement of the cast shadow near the base of the object and you will be an artistic genius.

Here’s a little test. Do you remember where does the cast shadow goes?

Did the lesson help? Let me know in the comments below.

Go back to the drawing concepts